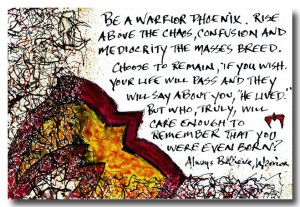 I have to admit I didn’t think about Warrior much until the news last year. UW was my favorite wrestler (I was 7-10 years old around his heyday in WWF). At the time my parents were going through a messy divorce and I looked up to him as a pillar of strength and stability.

Last year memories came ‘running’ back to me full force when I heard of him passing. I started reminiscing, I was amazed that I had forgotten about someone I had admired so much. It would be like seeing a close family member for the first time in 20 years.. but when I started reading about who he had become later in life, I realized he and I share a lot of common philosophies about the world and the nature of reality. Those crazy promos full of (seemingly) nonsensical jabber about, spirits, meditation, “Parts Unknown”.. and so much other metaphorical genius that came from him.

My ego at times feels silly for mentioning how a fictional character in a fake sport somehow has become such a powerful inspiration to me still at age 34. But after watching his YT videos and reading about his personal interests made me see that all of that crazy talk wasn’t crazy at all. I’d love to know more about his experiences with meditation and OBEs. So many passed the esoterically centered promos and interviews off as random babble but those who have visited Parts Unknown, those who have SEEN the place they came from but just forgot a little bit… I just wish I had the chance to talk to him about it while he was still here. For now I’ll take what I can get. My heart goes out to Dana, Mattie and Indie.. May what Warrior stood for continue to be the brightest beacon in life for them and the millions of storytellers now and in the future. =}